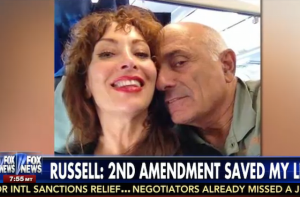 Ex-CNN anchor Lynne Russell and her husband Chuck de Caro, a former CNN reporter, were accosted by a robber in an Albuquerque motel room days ago, but they were both carrying firearms and de Caro was able to shoot and kill the robber. Earlier this week, Russell spoke out about the incident and told people talking about gun control to just “shut the fuck up.”

On Monday night (7/7), she spoke with Megyn Kelly and recounted everything that happened to them. As as she made clear, “there’s absolutely no doubt that we are alive today… because of the Second Amendment, because of my husband, his focus and dedication, and the fact that we had that legal gun with us.”

Kelly brought up how Russell had said she’s sorry the robber is dead and asked why. Russell replied, “Because I’d like to kill him again.”

Next Giuliani Defends Trump’s Mexican Comments: They Do ‘Rape People’