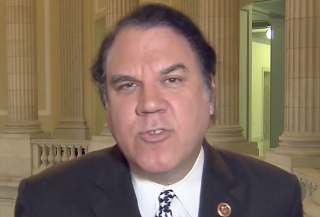 Remember when Alan Grayson was a thing? The Florida Democrat rose to national prominence in 2009 after he said on the House floor the GOP’s health care plan is “don’t get sick, but if you do, die quickly.”

More recently, Grayson’s gotten headlines for drama in his personal life, but now he’s ready to take his political career to the next level with a run for the Senate seat currently occupied by Marco Rubio.

Grayson believes he would make a better candidate for the Democratic party than Congressman Patrick Murphy, telling NBC News that first off, he has better name recognition, and secondly, Murphy used to be a Republican and some Democrats may stay at home if he’s the candidate.

And Grayson is so amazingly confident that he even said, “Frankly, one reason why Democrats are willing to crawl over hot coals naked to vote for me is because I’m willing to tell the truth.”

He’s not receiving any establishment support and the DSCC essentially ignored his announcement, but he’s not bothered by them. No word on whether he considers them to be “shitting robots.”