The old bromide “There are none so blind as those who will not see” is actually a misstating of the scripture verse Jeremiah 5:21: “Hear now this, O foolish people, and without understanding, who have eyes, and see not, who have ears, and hear not.”

I make this point because there are those who A) confuse the idea that Jesus is love, with condoning perversion and debauchery; and B) those who foolishly believe accepting pernicious evil will appease it.

Anyone one who believes homosexuals do not have an end game that has yet to be accomplished “have eyes and see not,” and “have ears and hear not.”

Homosexuals are not after equality; they, not unlike Muslims, are after conquest and just like all terrorists, they have carefully conceived a plan that they’ve been carrying out by any means available. But unlike Muslim terrorists they are not patient and that may well be their downfall, but I get ahead of myself.

The recent Supreme Court ruling dictated that regardless of one’s faith or personal convictions, we must now accept homosexuality. But therein is the bastardization of the truth. The homosexual agenda is not about just forcing America to embrace homosexuality, it is much more insidious than that and your federal government not only knows this they are complicit in this Erebusic agenda. 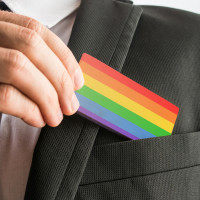 The following is from the [Homosexual] (I refuse to use the appellation “gay”) Manifesto: “Women, you cry for freedom. You say you are no longer satisfied with men; they make you unhappy. We, connoisseurs of the masculine face, the masculine physique, shall take your men from you then. We will amuse them; we will instruct them; we will embrace them when they weep. Women, you say you wish to live with each other instead of with men. Then go and be with each other. We shall give your men pleasures they have never known because we are foremost men too, and only one man knows how to truly please another man; only one man can understand the depth and feeling, the mind and body of another man.”

It further reads: “All laws banning homosexual activity will be revoked…We will unmask the powerful homosexuals who masquerade as heterosexuals…There will be no compromises. We are not middle-class weaklings. Highly intelligent, we are the natural aristocrats of the human race, and steely-minded aristocrats never settle for less. Those who oppose us will be exiled. We shall raise up private armies, as Mishima did, to defeat you. We shall conquer the world because warriors inspired by and banded together by homosexual love and honor are invincible as were the ancient Greek soldiers.”

The homosexual agenda has also co-opted the civil rights struggles of blacks for their own extremist anti-family agenda.

In 1987 Guide Magazine, published “the blueprint for the now global homosexual propaganda campaign to replace marriage-based society with a culture of sexual anarchy.” (The Overhauling of Straight America; Marshall Kirk and Erastes Pill; ppg 1 pg 208; Redeeming the Rainbow) It is the bible of homosexual propagandists. In it the goals and tactics of homosexuals are laid bare.

Amongst other things revealed in this article, homosexuals are directed to: 1) talk about homosexuals and homosexuality as loudly and as often as possible; 2) portray homosexuals as victims, not as aggressive challengers; 3) make homosexuals look good; 4) make [those who oppose homosexual marriage] look bad.

But I argue that all of this is foreplay for what their true end goal is. I believe the evidence and research shows that the lesbians and transgenders are the useful idiots pursuant to the true homosexual agenda. I further believe that their use of the civil rights struggles of blacks was nothing more than an ends to a means.

My contention is that the true homosexual agenda is a nation of male sodomites. If I am right, it is one of the greatest insipid and draconian acts of treachery perpetrated against a civilized society since the beginning of time.

Satan never comes to the table without an end game beyond that which is clearly visible. From my reading of the homosexual manifesto and the “Redeeming of the Rainbow” I have reached the conclusion that the homosexual agenda is 100 percent about homosexual men. It is not about lesbians and the transgendered as such, and it most certainly has nothing to do with concern for blacks, i.e., civil rights.

It is much more sinister than that. I believe the homosexual agenda’s secretive end game is a country of homosexuals, not lesbians, and not the transgendered. I believe they are not unlike the mythical “purebred” vampires of celluloid fame, and who look down upon all who are not singularly homosexual.

You don’t have to take my word for it. Read their manifesto, the book, and the articles I referenced above in totality and see for yourself.