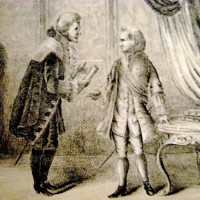 Mention slavery to any American and visions of captured Africans shackled in chains and suffering every kind of abuse known to man comes to mind. While this form of slavery is the most severe, there are other forms and degrees by which one might be condemned to bondage.

In western Europe slavery was eventually replaced with serfdom. Serfdom differed from slavery in that it was a voluntary lifetime contract between an individual and a lord that extended into perpetuity. In exchange for the military protection of their lord, and in some cases land to farm, serf’s bound themselves and their progeny to oppressive fees and taxation based on the assessed value of their property which they were contractually bound to live forever . Benjamin Franklin understood the concept of sacrificing freedom for protection. He stated, “Those who sacrifice liberty for security deserve neither.” The serfs of the feudal system usually found that they had struck a deal with the devil as they often subjected themselves and their families to relying on the protection of their masters in exchange for a hard life of toil and compromised liberty.

Whether it be slavery or serfdom, voluntary or involuntary, the loss of liberty to an elitist of some type requires more than sacrificing monetary advantages or choices about where one can live. First generation serfs sacrificed the very essence of their humanity for themselves as well as their progeny. The Bible has something to say about voluntary slavery – or by extension, serfdom. Galatians 5:1 states: “Stand fast therefore in the liberty by which Christ has made us free, and do not be entangled again with a yoke of bondage.” A simpler translations states it this way: “Christ has freed us so that we may enjoy the benefits of freedom. Therefore, be firm in this freedom, and don’t become slaves again.”

Can a free nation that accepts deception and responds with apathy remain free? Have we forgotten that it is a short detour from freedom to serfdom? Again, the Bible has something to say about this. Hosea 4:4 states: “My people are destroyed for lack of knowledge. Because you have rejected knowledge I will also reject you from being priest for Me; Because you have forgotten the law of your God, I also will forget your children.” These are dire words for a nation that has chosen to eroticize its children instead of teaching them sound academics, and a nation that has rejected the truth of God’s Word in exchange for Supreme Court decisions. In a free republic, whether it be voluntary or involuntary bondage, the loss of liberty is proceeded by apathy, a disregard for the wisdom of God. These conditions provide the environment for intimidation, fear, and power grabs – all of which have been supported by the tolerated ignorance of the masses.

To make matters worse, the would-be modern day lords understand what the masses have forgotten. They understand that an ignorant people are easily subdued. It is why slaves were not allowed to learn to read. An emancipated slave and renowned scholar, Frederick Douglass said, “Once you learn to read, you will be forever free.” He also said: “Knowledge makes a man unfit to be a slave.” Those marching on the road to serfdom easily believe the lies of the would-be modern day lords and have no knowledge that even a soft form of bondage does not result in Utopia. This is partially true because the history of such movements have been stricken from the pages of their textbooks, because entitlement mentalities approach critical mass, and because entertainment addictions have dulled the senses to reality.

Furthermore, the would-be modern day lords understand that a people easily intimidated by the politically correct police are easily coerced into surrendering their freedom of conscience along with their freedom of speech. Today we are seeing that these types of serfs would rather remain silent in the face of adversity than risk conflict.

These would-be modern day lords understand that of oppressive taxation and regulation paves the way for compromise, such as is the case for many farmers who have entered into a serf-type of agreement that encumbers the use of their property for them and their progeny in exchange for a meager farmland preservation benefit.

These would-be modern day lords also understand what Hitler understood – that children can easily be separated from the influence of their parents through cleverly disguised curriculum that paints parents as foolish and archaic-thinking fools. And they further understand that this can also be accomplished by giving children license to participate in erotic behavior, and by eradicating the noble history of this nation and leaving in only the hypocrisy of flawed men. This schoolhouse philosophy has been systematically undermining the foundations of this nation, the sacred foundations of the family and the moral fiber they were founded upon. The Bible also has something to say about this. Psalm 11:3 says, “If the foundations are destroyed, What can the righteous do?”

So, what can the righteous do?

First, the righteous must show up. Gone are the days of living peaceful lives safely cocooned in the privacy of your home and church. The righteous must understand that it’s time to join together and fight for liberty or lose it forever.

Next, they must refuse to surrender their children’s education to the state. This doesn’t necessarily mean removing them from government-run schools, which may not be an option. It does mean that they must fill in the gap and educate their children in the areas that have been contorted or are absent from their children’s textbooks.

Next, the righteous must do all they can to educate the willfully ignorant. This will take creativity and effort, and it will also take boldness and commitment. It will also take understanding that we cannot educate others if we are not educated ourselves. And this education must extend to properly vetting political candidates as well as the understanding the well-packaged programs that will eventually enslave us – like “Sustainability” and any infringements on our rights secured in the first 10 Amendments to the Constitution.

In conclusion, only an informed and committed remnant of the Most Holy God can derail America from the road to serfdom. But do they have the passion? Do they have the commitment? Or will they submit to a yoke of slavery?

We may have many thoughts about how to stand against tyranny, but we must stand. The words of the former slave, Frederick Douglass, are perhaps the most profound regarding the ongoing battle between liberty and tyranny. He said:

…If there is no struggle, there is no progress. Those who profess to favor freedom, and yet depreciate agitation, are men who want crops without plowing up the ground. They want rain without thunder and lightning. They want the ocean without the awful roar of its many waters. This struggle may be a moral one; or it may be a physical one; or it may be both moral and physical; but it must be a struggle. Power concedes nothing without a demand. It never did and it never will. Find out just what any people will quietly submit to and you have found out the exact measure of injustice and wrong which will be imposed upon them, and these will continue till they are resisted with either words or blows, or with both. The limits of tyrants are prescribed by the endurance of those whom they oppress…

If you care about preserving liberty for yourself and generations to come, you have no other choice: you must engage in the battle. And to be sure, doing nothing is a choice. It is a choice for serfdom.

Next [VIDEO] Donald Trump Punished For Telling The Truth