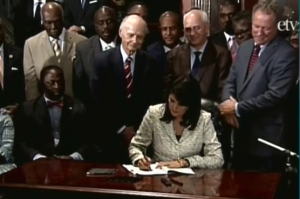 Republican South Carolina Governor Nikki Haley signed legislation Thursday afternoon that will remove the Confederate battle flag from the grounds of the statehouse and place it in a museum instead.

Haley made explicit reference to the death of nine people in Charleston’s Zion AME Church at the hands of a racist shooter as the catalyst for change. “Nine people took in someone that did not look like them or act like them, and with true love and true faith and true acceptance, they sat and prayed with him for an hour.”

Previous Alan Grayson: Democrats Would ‘Crawl Over Hot Coals Naked to Vote for Me’