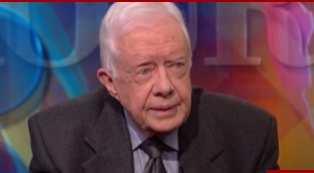 Former Democratic President Jimmy Carter argued Thursday that even sixty years after the civil rights era, there was still “innate racism” in America.

PBS Newshour host Judy Woodruff opened the interview by asking about race relations. “Why do you think this country still wrestles so much with race?”

“Well, I think we kind of breathed a sigh of relief back in the ’60s after we had 100 years of racial discrimination…” he said. “And after the Johnson years of Voting Rights Act and Martin Luther King, Jr., and Andy Young and others being successful, I think the United States kind of breathed a sigh of relief and said, ‘Well, we’ve resolved the race issue.’”

“I think the recent high publicity about the police and black confrontations and the tragedy in Charleston have reminded us that we still have a long way to go,” he said. “There’s still innate racism in our country that still needs to be addressed accurately, and I think the Confederate flag has been, for some people, a lingering element of this.”

Next [READ] The latest Town to make it clear THIS IS NOT A GUN FREE ZONE!