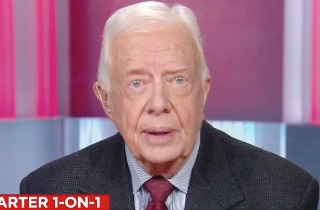 Former President Jimmy Carter said on CNN today that “very few” still view the Confederate flag as a racist symbol, but it should still be taken down because of the strong feelings it holds for some.

Jake Tapper asked Carter, a former Georgia governor, for his thoughts on the flag, the fact that Georgia’s current flag is based on an old Confederate one, and whether it should be changed.

Carter said he’s “very proud” of his state for taking the battle flag from its flag years ago, but didn’t say much more than that.

He did tell Tapper he’s been talking about discrimination for years, even while he was governor, and said, “There are very few people that still look upon the Confederate flag as a racist symbol, but for those who feel that way, black people in our country, we should do away with the Confederate flag and its emblem as white superiority in any place that it exists.”

Previous Ted Nugent: ‘Donald Trump Should Be Given The Medal of Freedom’

Next Who Is The Latest Hollywood Elite To Support Trump?