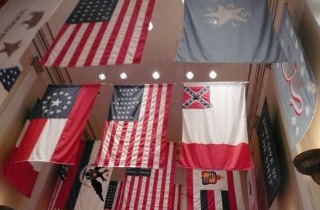 The debate surrounding the Confederate Flag has reached the happiest place on Earth. Walt Disney World joined the ever-expanding list of businesses and associations fleeing from the flag’s controversy on Wednesday, after removing it from a history exhibit in one of its parks.

The banner previously flew in Epcot’s American Adventure theater, where guests saw it amongst 40 other flags as part of its animatronic-featured edu-tainment show on American history. The Orlando Sentinel reported that flag that was removed was not the standard “Southern Cross” battle flag, but rather, the Confederacy’s third flag, which featured the cross on upper-left-hand corner, bordered by a field of white with a thick, red stripe at the other end.

“I think in this day and age we shouldn’t be promoting a part of our history we’re not proud of,” said Sheri Labowski, a tourist who agreed with Disney’s decision.

The move comes three weeks after the image’s controversy was renewed after Dylann Roof led a racially-motivated attack against a church in Charleston, killing nine people.

Previous Black Man kills 7 in New Jersey, and Pennsylvania Not Peep from the Mainstream Media

Next Ted Nugent: ‘Donald Trump Should Be Given The Medal of Freedom’