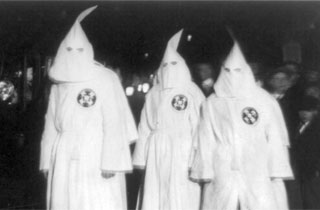 In the future, citizens in Georgia might innocently be asking for directions on the interstate before being told, “You might want to find an alternate route. That highway belongs to the Klan.”

In Georgia’s Union County, the state court of appeals heard arguments on Friday in order to address a prickly question: Can the Ku Klux Klan “adopt” a one-mile stretch of highway under the national “Adopt-A-Highway” program?

The chapter has been petitioning and seeking legal assistance from the American Civil Liberties Union ever since the Georgia Department of Transportation denied the Klan’s initial application in 2012. The not-so-surprising reasons the department described included that “the impact of erecting a sign naming an organization which has long rooted history of civil disturbance would cause a significant public concern”:

“The Adopt A Highway Program is designed to allow civic-minded organizations in good standing to provide the valuable public service of removing litter from designated roadways. Participation in the program should not detract from its worthwhile purpose.”

The ACLU came to the conclusion that the case was a matter of free speech, describing the qualifications as “unconstitutionally vague” and in violation of the Due Process.

“Defendants have refused to issue an Adopt-a-Highway permit to Plantiffs, based upon Defendant’s perception of the Planitffs’ speech, in violation of the Georgia constitution,” the ACLU said in its lawsuit.

This is not the first time this has happened either. Neo-Nazi groups and “minutemen” militias have adopted highways in the past, despite concerns over any objectionable ideas such groups might stand for.

Previous [VIDEO] Trump Warns: If Rubio Gets Elected, ‘You’d Have People Flowing Across the Border’