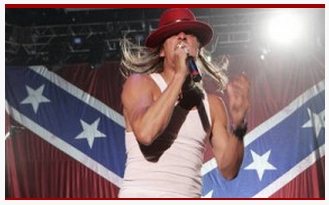 Rock musician Kid Rock, who often uses the Confederate flag as a prop in his performances, defiantly responded to recent criticisms of its use in a quote given to Fox News.

“Please tell the people who are protesting to kiss my ass,” the statement read in its entirety (which Fox News’ Megyn Kelly appropriately watered down for television Thursday night).

Earlier in the week, the Detroit chapter of National Action Network called on the hometown rocker to ditch the Confederate symbol. “How in the hell can Kid Rock represent Detroit and wave that flag just generating millions and millions in ticket sales — a flag that represents genocide to most of Detroit?” asked the Al Sharpton-run organization’s political director.

In defense of the rocker, Kelly and her guest Dana Loesch noted that Kid Rock has a black son, making it unlikely he’s a virulent racist.