Back in April, at the height of the Baltimore riots, the PD sent out information about a “credible threat” they received: 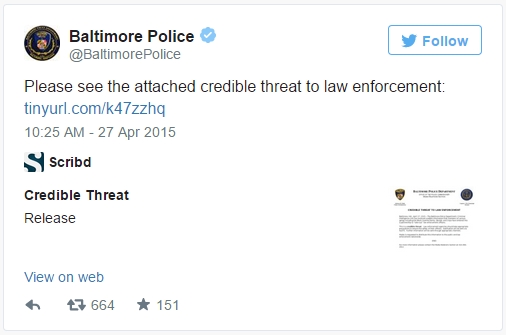 As Mediaite and other sites reported at the time, the Baltimore PD said they’ve gotten credible information that local gangs were planning to “take out” officers during the riots.

Fast-forward to this week, when the Baltimore Fraternal Order of Police released its review of how the police managed the riots. Overall they criticize police leadership for causing “chaos and lawlessness” by holding cops back, giving orders not to engage protesters, and providing cops with inadequate equipment, among other things.

But they do acknowledge a “serious error” in the Baltimore PD sending out that warning––that a lot of media outlets picked up on––that was only just a rumor:


The credible threat was, in fact, an unconfirmed rumor. Circulating this rumor undermined the credibility of law enforcement and unnecessarily inflamed tensions…

The term “credible,” when used in connection with intelligence, has a specific meaning, including that certain criterion have been met. If Captain Kowalczyk acknowledges that this is the law enforcement best practice, it would be a start in restoring confidence to the rank and file in the commanders of the Baltimore Police Department.

You can read the whole review here.

Previous [VIDEO] Pat Robertson: ISIS Beheadings "Maybe the Best Thing That Ever Happened to the World"