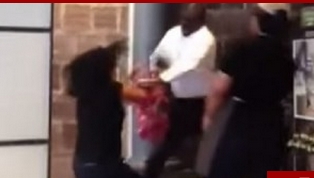 On Wednesday, Gawker reported on a YouTube video of a rather violent fight between a ginormous Panera manager and his petite, recently-fired employee. The size difference alone is startling — the manager has a least a full head and a half on the ex-employee. But its the subsequent punches that sting the most.

The video immediately went viral and, as you can probably imagine, the outcry against Panera was swift. The company didn’t take long to respond to Gawker’s request for comment:

A Panera spokesperson tells us: “Today there were reports of a physical altercation between two associates at our Park Avenue South bakery-cafe. We have a zero tolerance policy for violence and worked swiftly with authorities to investigate. The associates who were determined to be involved no longer work for Panera.”

Yes, the woman in the video slaps the man first. She eggs him on repeatedly, and you can hear her hand connect with his face at the 0:07 mark. Still, he’s damn near twice her size, and responding with a throw-down wasn’t his best move.

Next [PHOTOS] 501ST LEGION STORMTROOPER WALKS OVER 600 MILES TO COMIC-CON, THE REASON IS TEARFUL...