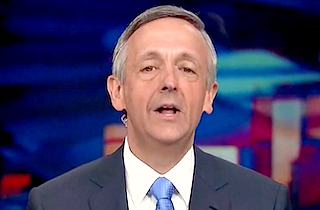 Pastor Robert Jeffress told Fox & Friends Weekend Sunday morning that churches needed to enforce the immigration laws*, and that meant turning undocumented immigrants over to the government to prevent incidents like the murder of a San Francisco tourists by an undocumented immigrant last week.

Some congregations have offered “sanctuary” to undocumented immigrants. Jeffress, a conservative pastor from Dallas, said they were “harboring illegal immigrants who may be criminals.”

“Jesus was not this wimpy little guy who walked around munching sunflower seeds and saying nice things to people,” he added. “The real Jesus of the Bible said ‘render unto Caesar the things that are Caesar’s. That is: obey the government.”


“The real Jesus is just as concerned by the horrific death of Kate Steinle…as he is about the poverty and plight of immigrants,” he concluded.

Watch the clip below, via Fox News:

Previous [VIDEO] Chris Christie: 'Nobody in the Real World' Cares About Donald Trump

Next [VIDEO] Prince Philip Gets Impatient with Photographer: "Take the F*cking Picture"