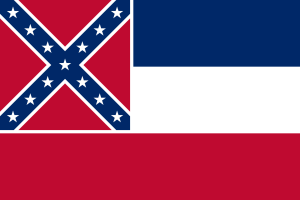 The NAACP has passed a resolution calling for Mississippi to change its state flag which includes the Confederate logo. Jackson County NAACP President Curly Clark said that information was announced Tuesday morning at a NAACP national convention in Philadelphia.

“Whereas, the State of Mississippi now remains the sole state in our country to embrace a symbol of war, hate and a failed attempt to perpetuate its right to slavery, into its flag while regarding it as “heritage” despite inflicting degradation upon its citizen descendants of slaves,” the resolution state in part.

The resolution goes on to say the Confederate battle flag has “by far been the constant, most visible symbol of hatemongers and hate groups who have engaged in violence against others because of their race and religion, which includes hangings, cross burnings, car and home bombings, church burning across the south, and most recently church mass murders in South Carolina”.

According to the resolution, the NAACP plans to bring national attention supporting the end of Mississippi’s state flag which includes the Confederate logo.

Next Woman arrested for Printing her own money, After she read on the internet Obama made it legal