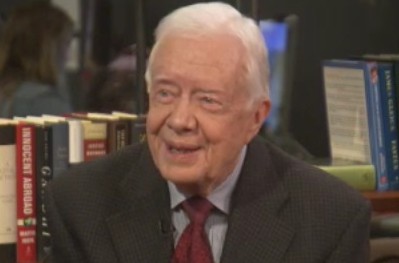 Former Democratic president and born-again Christian Jimmy Carter declared that he believes Jesus would embrace gay marriage. In support of this belief, flying in the fact of 2,000 years of scriptural and historical scholarship, Jimmy Carter cited noted theologian Jimmy Carter.

Let’s take a look at some of the language Carter and host Marc Lamont Hill used:

All of which seems be a tacit admission that Carter realizes there’s basically no textual or historical support for his assertion. He just believes that he’s right. And feelings, as the modern left will tell you, trump all.

There are two major and popular perceptions of Jesus, the divine Jesus Christ and the so-called “Historical Jesus,” historians’ attempt to reconstruct Jesus’ life without making any claims of divinity. Either way you conceive of Jesus, it’s extremely unlikely he was a gay marriage supporter.

If Jesus was just a man, he was a peasant in 1st century Galilee. He was a member of a religious community with extremely strict, patriarchal marriage laws and that believed homosexuality should be punished with death. The notion that he would have positive beliefs towards gay marriage literally millennia before any of the world’s brightest minds even considered that marriage could exist outside of a man-woman marriage… well, it’s more than a little far-fetched.

If there are any atheists or skeptics who do believe that Jesus was so incredibly prescient and ahead of his time, I earnestly suggest you might as well embrace His omniscience and divinity. But of course, you’d have to believe that the same disciples who copied down Jesus’ radical claims of divinity and complete equality of the sexes, races, and classes accidentally forgot to add the gay thing.

As for the notion that the Jesus of the Gospels — the Messiah and Son of God that Carter has worshiped for a lifetime — would support gay marriage… well, Carter was right to admit he didn’t have any scripture to quote. The kindest interpretation is that the Gospels are silent about gay marriage. At worst, they are explicit that marriage is intended to be between man and woman.

“Have you not read that He Who made them in the first place made them man and woman?” Jesus told the religious leaders of the day, “It says, ‘For this reason a man will leave his father and his mother and will live with his wife. The two will become one.’ So they are no longer two but one. Let no man divide what God has put together.” How heterocisnormative, am I right?

And again, one would have to believe that Jesus’ followers remembered and put to writing Jesus’ radical assertions that men and women were equal, that slave and free were equal, that poor and rich were equal, that Gentiles and Jews alike could worship and find eternal life in the God of Israel, but forgot to jot down that gay marriage was a-okay. Instead, St. Paul’s letters– which Christians like Carter believe were divinely inspired– rather explicitly condemn homosexuality alongside adultery and other sexual immortality.

Carter’s belief that Jesus would approve of gay marriage stems from his belief that Jesus would “approve of any love affair that was honest and sincere, and was not damaging to anyone else.” But this is simply false. Jesus was categorically opposed to relationships outside of marriage and divorce and remarriage, regardless of whether they “damaged” anybody. On the contrary, He taught that even looking at someone lustfully was a sin. No damages there.

Even when Jesus saved the adulteress from execution and told her tormentors to judge not lest they be judged, He told her to “sin no more.” He simply wasn’t a proponent of America’s post-Sexual Revolution anything-goes ethos. If Jesus lived today, we’d get weekly Jezebel articles explaining how he was a slut-shaming mansplainer waging a War on Women.

So setting aside the Gospels and historic conceptions of Jesus, what is Carter left with? His personal feelings and “intuition.”

But far, far more Christians across the globe  believe he’s wrong. As Abraham Lincoln pointed out in the Gettysburg Address, both sides of the Civil War believed Providence was on their side. So did the Nazis and the United States, and the Crusaders and the Turks. When men decide what God would support based on their “institution” and personal beliefs, they almost always end up with a God parroting their own beliefs back to them. That’s why we Christians believe God inspired the Bible in the first place: so we could read it to figure out his stance on certain issues.

Liberals mocked George W. Bush mercilessly for claiming that God wanted him to invade Iraq and that God wanted him to be president (despite those quotes coming secondhand). We will see similar mockery of Carter’s presumption to know the heart of God, divorced from the actual language of the Bible and any historical context?

Somehow I doubt it.