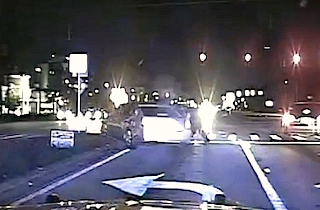 Edward Kelty, a 17-year-old driver from — wait for it — Florida, has been charged with attempted murder after running over a police officer while fleeing a traffic stop.

Officer William Anderson pulled the car over Monday night after reports of shots fired in the area. The driver tried several times to drive off, but was initially prevented by another car in front of it.

When Anderson approached the car with his firearm drawn, a man in the passenger seat ran off; when Anderson started to chase him, the driver plowed into him. Anderson fired several shots as the incident occurred.

Anderson , who is in stable condition per the Orlando Sentinel, was seen lying motionless in the street before another driver blocked his body from traffic with his vehicle.

The car was found burning nearby. Police identified two of the passengers but have not pressed charges yet; meanwhile, according to WESH-Orlando, they have filed “excessive force” complaints against the department.