Update (July 15, 2015): ABC15 has obtained video from the body camera of the back-up officer in the incident. The body camera was worn by Officer David Selvidge, who was cleared by Chandler Police of any wrongdoing. Portions of the camera footage can be seen in the video player above. 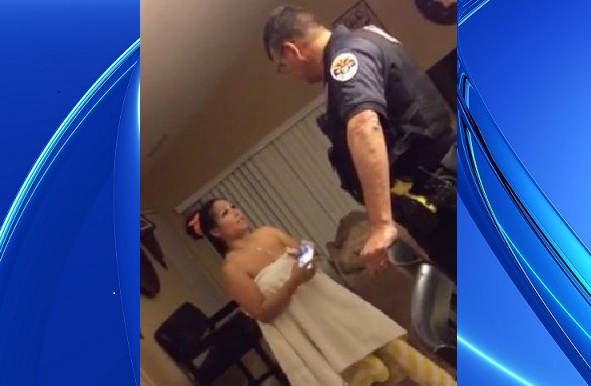 A woman handcuffed naked by a Chandler police officer who entered her home illegally is planning to file a lawsuit against the city.

Chandler Police launched an internal investigation after the incident. One of the officers involved retired in the middle of that investigation.


Police arrived at Rossi’s home after receiving a call about an argument between her and her estranged husband.

“I was in the shower,” Rossi said. “My daughter came to the shower and said there are two officers at the door. So I just grabbed a towel.”

When she answered the door, there were two Chandler Police officers. One of those officers was Doug Rose.

Rossi said Rose became very aggressive and she told him to wait at the door so she could go get a cell phone.

“It made me very uncomfortable,” Rossi said. “So I closed the door. I turn to go into my living room, and I probably get about five steps in; and all of a sudden, I just hear boots running in after me, telling me stop or I’ll arrest you.”

At that point, both Rossi and her daughter begin recording. That’s when things turned south.

WATCH WHAT HAPPENS IN THE VIDEO ABOVE.

“This was not the proper treatment of a citizen,” said Marc Victor, Rossi’s attorney. “This was disgusting. This was barbaric.”

Rossi also admits she took an attitude with the officer after he illegally entered her home.

“Any one of us would be upset if a police officer barged into our homes without permission,” Victor said. “She had a right to be upset.”

The cell phone video was influential evidence in the internal investigation. Unedited copies were provided to ABC15 by Rossi and her attorney.

Rossi was never charged with a crime, records show.

After reviewing the incident, Chandler Police internal investigators determined Rose entered the home illegally and without probable cause. The investigation also determined that Rose didn’t document arresting or un-arresting the woman or the fact that she was naked.

There was also no video from his body camera for the call, records show.

After the incident, the other officer involved immediately contacted his supervisor to raise questions about Rose’s actions. The second officer was cleared of wrongdoing.

To stay up to date read more HERE

Next Guns Returned To Nebraska Man After Help from NFOA & SAF