Back in 1865, when the Civil War came to an end, Oklahoma was neither part of the Confederacy, nor was it even its own state at the time.

Nevertheless, when President Barack Obama reached Oklahoma City on Wednesday to attend an interview for a documentary on the criminal justice system, his motorcade was greeted by a crowd of people waving the rebel battle flag: 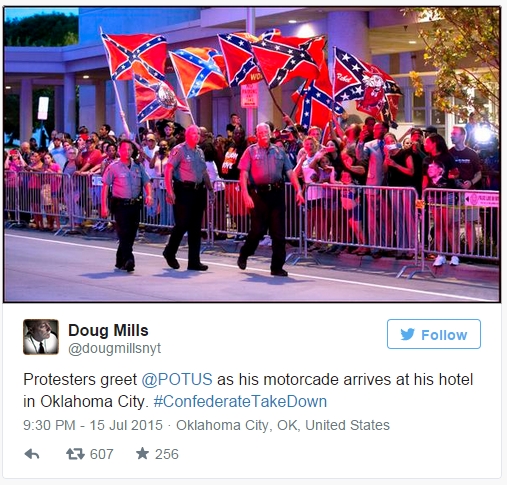 The protesters were mixed in with a larger crowd that was assembled in front of Obama’s hotel. Indications are that although the majority of the crowd bore American flags and signs of support, the flag wavers were picked up by local media reports that have spread across Twitter.

Local station KFOR reported that the demonstration was planned by an African-American man named Andrew Duncomb, who calls himself the “Black Rebel” and has been responsible for other pro-Confederate Flag rallies in the past.


“We don’t believe it’s a symbol of racism,” Duncomb said. “They’re blaming the racist problems on the flag and not on the real problems of America.”

Duncomb’s associates also denied that their flag use was for racist intent, though others attending the rally felt uncomfortable its presence following the flag’s renewed controversy from the Charleston Shooting.

Sequoya Turner tearfully said that she has lived in the state capital for seven years, and regretted that the flag had one its rare appearances there for the president’s arrival. “He should’ve had a better welcome than he had.”

Watch the report below, via USA Today:

Next CELL PHONE VIDEO: Officer 'illegally' enters woman's home, arrests her while she is naked