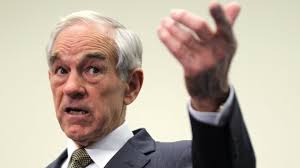 According to Ron Paul, current Republican primary surger Donald Trump is not just a “dangerous person,” but an “authoritarian” who likes bossing other people around.

Appearing on Alan Colmes‘ Fox News radio show, the former Republican congressman indicated he isn’t concerned with whether Trump is a force for good or bad within the party. However, he added, “I think he’s is a dangerous person. And a lot of people find him sort of funny, and love him, even libertarian types.”

Beyond dangerously resembling a half-rotted canteloupe, how exactly is Trump a “dangerous person”?

“He’s so disruptive to the party system, and I enjoy that too,” Paul explained,” but I think he’s a man that if conditions deteriorate — which they can, see I work on the assumption that the world is no more stable than Greece, and if those conditions come — people want to be told what to do.”

More from the retired physician:

“People listen to him, and believe he may be raising white horses someplace and he’s going to ride in. Because he is almost the opposite of a libertarian, because it’s not like ‘I want to give you your freedom and your liberty to run your life as you choose. Your civil liberties are absolutely yours, you can’t hurt anybody, it’s your own money you can spend it any way you want.’ But he sounds like the person: ‘I know the answers and I’m going to do this and I’ve done this, I’ve done this, this and this.’”


We eagerly await Trump’s insult-laden Twitter tirade in response to the elder Paul.

Listen/watch below, via Fox News Radio:

Next [VIDEO] Sickening: This is the VIRAL video of a mother cheering a Very Young Girl on as She fights another young girl