When asked to make a statement, they declined and noted that their attorney had advised against it.

A Connecticut couple was charged after a 1-month-old was found to have 20 fractures in total.

According to police reports, Kali Sastrum, 18, brought the child into St. Mary’s Hospital on July 12 with a broken leg and a complete break of the left femur bone, WFSB News reported. Sastrum reportedly brought the infant to the hospital for a swollen leg and was apparently shocked when she was told the baby had broken bones. 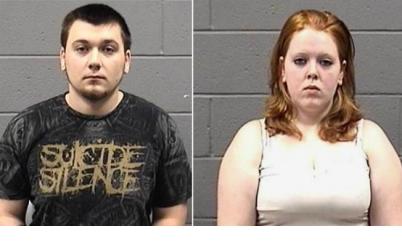 Sastrum and her boyfriend Nikolas Radaskie, 21, who is also the baby’s father, both reported that they had no idea how the infant’s bones had been broken, NBC Connecticut reported. The couple also noted that the baby had had no contact with anyone else but them.

When asked to make a statement, they declined and noted that their attorney had advised against it.

Police later received a fax from the Connecticut Children’s Medical Center noting that the child had multiple fractures to his ribs, a torn labial frenulum, and a broken blood vessel in his eye.

Doctors insisted that the injuries were a result of inflicted trauma, not an accident or self-infliction.

Both Sastrum and Radaskie were arrested on Monday and were charged with risk of injury to a minor. They were both released on $25,000 bail each. They are expected to appear in court on August 4.