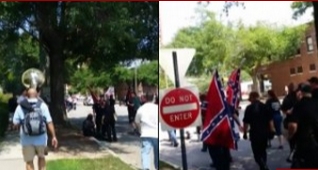 A Columbia, SC man trolled last weekend’s KKK march using nothing but his wits — and a sousaphone.

The KKK, along with various other neo-Nazi and white supremacist organizations, organized a march in South Carolina Saturday in support of the Confederate flag, which was removed from before the statehouse after the assassination of nine African-American churchgoers at the hands of a white supremacist last month.

Matt Buck was on his way home from an anti-KKK rally when he intersected the march, and decided to give them their own sardonic soundtrack. Buck ran home and retrieved his sousaphone, essentially a marching tuba. In a YouTube video, Buck is heard accompanying the marchers with circus riffs and mock-bombast.

“I didn’t really know how to show my opposition, so that was my way of doing it,” he told the Charleston City Paper.

Next A Mideast Game of Thrones