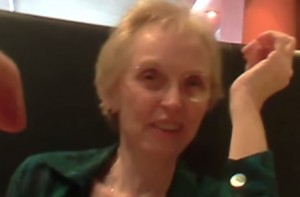 The group behind the undercover video purportedly showing a Planned Parenthood official speaking frankly about harvesting fetal organs between bites of dinner have released another potentially damaging video of one of the organization’s leaders.

The Center for Medical Progress has released a video of Planned Parenthood Federation of America’s Medical Directors’ Council President Mary Gatter seemingly haggling over the price of fetal tissue. “What would you expect for intact tissue?” an undercover actor asks her.

“Well, why don’t you start by telling me what you’re used to paying,” Gatter says. “…You know, in negotiations whoever throws out the figure first is at a loss, right?”

“What I want to know is, what would work for you? Don’t lowball it, tell me–”

Later in the discussion, she says that she wants a higher price if it turns out Planned Parenthood’s California affiliates are getting more. “Let me just figure out what others are getting, and if this is in the ballpark, then it’s fine, if it’s still low, then we can bump it up. I want a Lamborghini!” Gatter joked.

“What did you just say?” the actor asked.

“I said I want a Lamborghini!” she repeated.

Throughout the video, Gatter constantly clarifies that Planned Parenthood is not in it for the money. “You know the money is not the important thing for me,” she says after the Lamborghini crack. “But it has to be big enough that it’s worthwhile for me.”

The Center for Medical Progress also alleges that the video shows that Planned Parenthood alters its abortion procedures to ensure preserving organs, which is against federal law. In fact, Gatter seems aware that doing so would be unethical, but tells the actors she’ll try anyways.

“If our usual technique is suction at 10 to 12 weeks, and we switch to using an IPAS [a brand of manual vacuum aspirator] or something with less suction to increase the odds that it will come out as an intact specimen, then we’re kind of violating that protocal that says to the patient, ‘We’re not doing anything different in our care of you,’” she warns at first.

“Now to me, that’s kind of a specious little argument,” she continues. “And I wouldn’t object to asking Ian, who’s our surgeon who does the cases, to use an IPAS at that gestational age in order to increase the odds that he’s going to get an intact specimen.”

In response to the first undercover video, Planned Parenthood forcefully argued that the video was “heavily-edited” and that it was part of an illegal harassment campaign. When contacted by Mediaite, the Center for Medical Progress said the full video of the meeting with Gatter is currently being uploaded to YouTube, and will be published shortly.

Previous [VIDEO The Steam On Obama

Next Little Girl Asked Her Single Dad…Where Is Mommy? But Then This Happened.