Upon the release of dashboard camera footage showing the aggressive arrest of Sandra Bland by a Waller County police officer last night, speculation raged that the video had been edited.

Bland died in police custody of what officials first claimed was suicide; they are now treating her death as a murder investigation.

Documentary filmmaker Ben Norton spotted two instances in which images either appeared to splice and repeat, or skip time, while the audio continues uninterrupted. In one a man leaves Bland’s car twice; in another a white car enters the frame and disappears. Watch below:

Nonetheless, the Texas Department of Public Safety swore Wednesday morning no edits had been made, and that the odd repeats and skips were due to the lengthy upload process. The DPS promised a DVD version to press outlets, which will presumably not contain the errors. Via Texas Tribune’s Evan Smith: 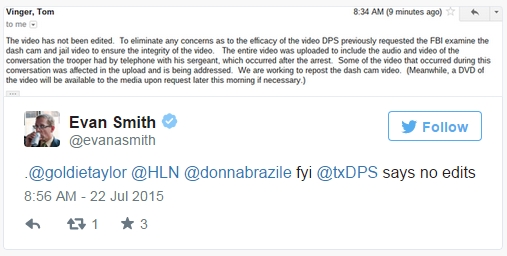 That will likely satisfy no one:

Bland was arrested after being pulled over for a traffic violation; she repeatedly demanded to know why she was being arrested, as officer Brian Encinia threatened to “light her up.” Bland was found hanging from a trash bag in her jail cell three days later.

Next The John McCain Conundrum