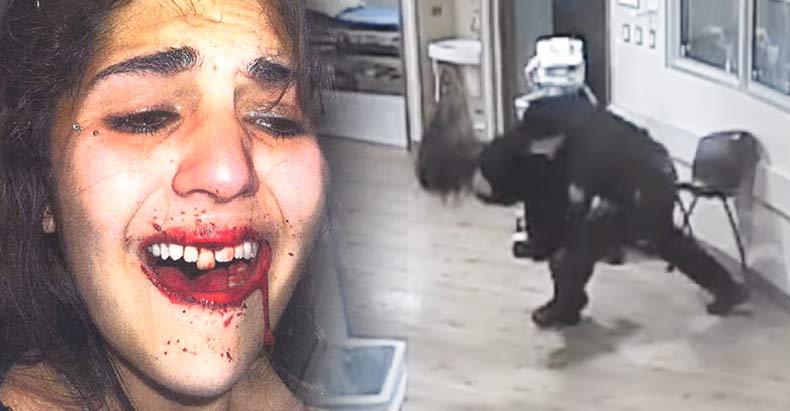 In November 2013, officer Tyler Walker and several other officers were dispatched to a residence over reports of a gun. The officers found no probable cause, but they did encounter an inebriated 18-year-old girl, Alexis Acker.

According to reports, Acker was “intoxicated and verbally uncooperative with police,” and became “physically combative” when officers arrested her boyfriend on an unrelated warrant.

Their claims of Acker being “physically combative,” however, hold very little water after reading their report of what was caught on a hospital surveillance camera. The video, obtained by the Colorado Springs Independent, was just discovered as a part of an in-depth report looking into the issue of police brutality.

Acker was arrested on charges of resisting arrest and assault on a police officer. Because she was allegedly drunk, she was taken to Memorial Hospital for “medical clearance” before being taken to jail “due to her intoxication level and combative nature,” Walker says in his report.


During her stay at the hospital, Acker would have her teeth knocked out and suffer injuries that would affect her for the rest of her life. The cause for her injuries was captured on this video.

At the beginning of the video, we see Walker escorting in the 100 lb girl into the hospital without incident. Acker appears to be compliant, but she apparently took too long to sit down after being told to sit down.

Walker proceeded to give her a little encouragement to sit down and shoved her into the chair with apparent excessive force. As a natural reaction to being attacked while handcuffed, Acker kicked her leg out.

Her foot barely brushed the pants of officer Walker. However, in his report, Walker would make it seem like he was under attack and that she “kicked him in the groin area.”

After suffering a foot to his pant leg, Walker punched Acker in the chest. He then grabbed the tiny, handcuffed, and inebriated teen and body slammed her face first onto the hospital floor, injuring her neck and knocking out her teeth.

According to the Independent,

Acker was charged with five offenses, including two felony assaults on a police officer. In a plea bargain, she pleaded guilty to misdemeanor obstruction of a police officer and felony menacing, receiving a deferred sentence on the felony, says Cindy Hyatt, her criminal attorney.

Hyatt says she’s skeptical Acker kicked Walker in the groin. “There’s no way she kicked him that hard in the balls,” she says. “He wouldn’t be standing. He’d be hunched over.

“This is a very violent attack on someone who is in handcuffs, who is partially restrained and tiny, and there’s just no need for it,” Hyatt continues. “You can’t have something like this, whether it happens 100 times, 10 times or one time. It’s unacceptable. It cannot be tolerated. As a patrol officer in particular, that’s part of the job, dealing with that without planting someone’s face in the floor.”

Because Walker injured himself while body slamming the teen, he was advised of his rights as the victim by CSPD. The department refuses to say whether or not Walker faced any discipline for his actions. He remains on regular duty.

In the meantime, it will be the taxpayers of Colorado Springs who will foot the potential $500,000 bill for the lawsuit on Acker’s behalf.