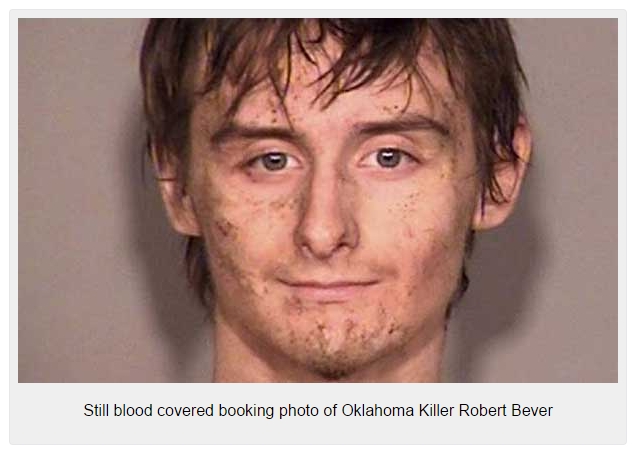 That’s right, there was a mass murder in which five people were killed and one other seriously injured in Oklahoma a few days ago that the media is virtually ignoring.

Why is this criminal act being skipped by the national media?

Because no guns were used in the crime.

The young man the police say killed his family did so with a knife. That’s right, no guns, no national interest in a mass murder.

The murders occurred on July 25, 2015. A sister survived but is seriously injured. And the police have no motive yet.


Police in Oklahoma say they have turned to social media posts for clues about the motive of a teenager accused in the stabbing deaths of his parents and three siblings during a late-night attack that left bodies strewn through the family’s home.

A booking document filed by police in the Tulsa suburb of Broken Arrow accuses Robert Bever, 18, of five counts of first-degree murder and a count of aggravated assault in the attack Wednesday night.

Bever’s 16-year-old brother also was being held. Because he is a juvenile, officers have not released his name or announced charges against him. Broken Arrow Police Cpl. Leon Calhoun said both brothers were cooperating with the investigation.

Calhoun said Friday that the agency was still looking for a motive and was searching social media accounts that they believe belong to Bever. Those include community site Pinterest and a Facebook account.

The dead include his parents, David Bever, 52, and April Bever, 44. The Oklahoma State Medical Examiner’s Office on Friday also identified the three dead siblings as Daniel Bever, 12; Christopher Bever, 7; and Victoria Bever, 5. An unidentified 13-year-old sister was in serious but stable condition in a hospital and an unnamed 2-year-old sister wasn’t harmed and was placed in state custody.

But this story is practically absent from the major scheme of the national media. Why? Because no gun was used and the media can’t push its anti-gun narrative. So this story gets ignored.

Previous Phony GOP Conservatism Has Worn Out Its Welcome

Next No Guns for Social Security Recipients?