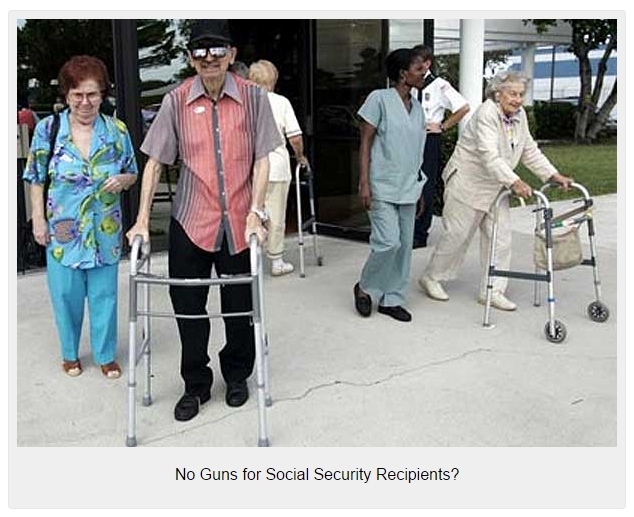 The Los Angeles Times reported on Saturday that the Obama administration is pushing a plan to submit the names of up 4.2 million recipients of Social Security benefits to the FBI’s National Instant Check System, or NICS, the massive database used for criminal background checks on gun buyers.

Only “prohibited persons,” those for whom possession of firearms and ammunition is illegal under the Gun Control Act, are included in the NICS database.

Inclusion in NICS not only blocks gun sales to people on the list, it flags them as Prohibited Persons under the Gun Control Act, and that it is a felony for them to be in possession or have access to firearms or ammunition under any circumstances.

The law regarding “prohibited persons” has become increasingly broad over the past few decades.  It was originally passed as restrictions on violent felons, fugitives, people with dangerous mental disorders, and others who pose a significant threat to public safety, but in fact took away the rights of many non-violent offenders and people who would not be considered dangerous.  With the addition of the Lautenberg Amendment in the 1990s, the prohibition was expanded to include anyone convicted of a misdemeanor crime of domestic violence.

Under this provision, a wife fined $25 for slapping a cheating husband’s face is barred from possession of firearms for life.

The law (USC Title 18, Section 922, subsection g.) also prohibits possession of guns or ammunition by anyone “who has been adjudicated as a mental defective or who has been committed to a mental institution.”

Note the key word “adjudicated.”  While most reasonable people would interpret that to mean a ruling from a court, the implementing regulations for this law use a much broader definition.  Under the Federal Code of Regulations (27 C.F.R. § 478.11) the relevant section reads as follows:

“(1)  A determination by a court, board, commission, or other lawful authority that a person, as a result of marked subnormal intelligence, or mental illness, incompetency, condition, or disease:

Many years ago, under Clinton, the Veterans Administration, began submitting the names of veterans and dependent beneficiaries to NICS, whom they said met that definition of “mentally defective,” including anyone who is not considered able to manage their VA benefits.  Anyone who has had a fiduciary – usually a spouse, parent, or other relative – designated to manage their VA account, is added to NICS and considered a Prohibited Person.

The VA makes this “incompetence” determination, not through a court or commission, but through its own bureaucratic process.  There is no judge, or even a determination from a physician required, and the VA determination of incompetence is not binding on any other aspect of the person’s life.  A person rated as“mentally incompetent” under the VA can still enter into contracts, buy and sell real estate, incorporate a business, marry, divorce, or even adopt a child.

The only things they can’t do are sign VA-related documents or purchase or possess firearms or ammunition.

The Social Security Administration standards for “incompetence” are similar, it is merely a bureaucratic finding that the person’s interests are best served by having their benefits processed through what they call a “Representative Payee” rather than going directly to the beneficiary.

If the Obama administration gets their way, all of these people will also be prohibited from ever possessing a firearm or ammunition – even under close supervision – for the rest of their lives.

For most people, a determination of incompetence and the assignment of a fiduciary results in additional financial benefits.  Both the VA and Social Security see this as an additional disability and they increase benefit payments accordingly.  In the VA system, this can result in monthly benefit payments going up as much as $1000 per month or more.  That can be a pretty strong incentive for a person to go along with, or even seek, an incompetency determination.  Some people, when they discover that this is going to cost them their right to arms, have tried to fight the system, but saving their rights means giving up the additional financial assistance – and that can be a tough choice. (read financial coercion)

Nobody wants violent lunatics and suicidal individuals to get their hands on guns, but infringing on the rights of millions of innocent, harmless citizens is by no means a reasonable way for the VA or Social Security to attempt that.

The Republicans failed to address this problem when they controlled both houses of Congress and the White House, but they have had a bill in congress every session for the past five years called the Veterans Second Amendment Protection Act, which would correct VA’s dangerous overreach by requiring an actual adjudication that a person is a danger to themselves or others, before firearms rights could be revoked.  Now that they once again control Congress, things aren’t looking much better.  The bill only has four House co-sponsors.

If you are outraged by this situation, your elected representatives need to hear from you.  The VA practice needs to be stopped, and it must not be allowed to spread to Social Security or other government programs.  You can reach your Senators and Representative through their House.gov and Senate.gov links, or by calling 202-224-3121.

Previous Mass Murder in Oklahoma, But Media Could Care Less, No Guns Involved

Next Why No National Outrage Over Murdered Marines?