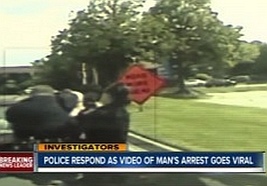 The increasing use of personal recording devices to capture and later scrutinize supposed police brutality is a mixed bag. In the case of the McKinney cop who used excessive force while arresting African-American teenagers at a pool party in Texas, smartphones proved highly useful. During the Cleveland protests that erupted over the lawful arrest of an intoxicated minor, however, they were more abused than anything.

Hence the insistence on personal body cameras for police, a popular nationwide measure that many interpret to mean enforcing greater restraint on cops. However, as proved to be the case in Lenexa, Kansas, these and other department-mandated cameras can help police combat false or uninformed accusations of police brutality.

John Sherman recorded the seemingly violent arrest of John Harrison, a Black man, by two white officers during a traffic stop. According to Sherman, he watched officers walk Harrison to the back of his car, but nothing “that warranted being thrown to the ground.”

Yet Sherman’s viral video of the arrest only shows Harrison already pinned to the ground by the two officers. It sheds no light on what transpired beforehand, and that’s where the cops’ body cameras and dashboard cameras come into play.

Mayor Dawn Layman told KSHB Sherman’s video is “only a 30-second snapshot of what actually occurred”:

Layman said the officer pulled over John Harrison, 30, because he wasn’t wearing his seatbelt.  The video shows the officer, ask Harrison for his driver’s license but he didn’t have it on him.

While watching the video, Layman points out that the officer walks back to his cruiser and calls for backup. The reason he gives for doing so, is because he said he smelled marijuana coming from the car.

Layman said the officer learned after running Harrison’s plates that he had several warrants out for his arrest.

Once backup arrives, the initial and backup officers walk back to Harrison’s car. They ask him to get out and walk him to the back of the car.

The video shows that as they’re placing him in handcuffs, Harrison raises his fist and turns to throw a punch at the officers.

Sure enough, Harrison turns and tries to swing at the officer directly behind him at the 1:22 mark in the video below, courtesy of KSHB: