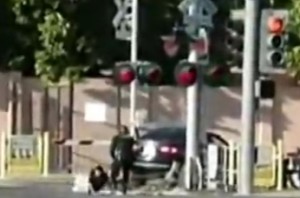 A deputy in California’s San Mateo County saved a man from an oncoming train Monday with literally seconds to spare.

Dramatic video captured on the scene shows the man lying inert on the train tracks, as the police officer pulls him by his arm along the ground. Seconds after they clear the tracks, a train destroys the man’s car.

The San Jose Mercury Times reports that deputies were responding to a nearby call, saw the car on the tracks and swiftly moved into action. Police believe the man may have been drunk.

Next St. Louis Man Attacks Police Car, Yells "This Is for the Black People"