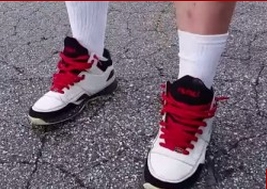 One of the more vocal pro-Confederate flag supporters at a rally in Stone Mountain, Ga., was caught in a now-viral video wearing FUBU brand sneakers.

George Chidi confronted the man following a heated conversation with anti-Confederate flag protesters on Saturday. After a brief handshake, Chidi identified the sneakers, which were designed and made by the American clothing and hip hop apparel company started in 1992 by African-American entrepreneurs.

Despite Chidi’s note about the shows, the man in the video didn’t seem to care all that much whether or not his shoes were created by non-whites. That, or he just didn’t see the irony of the situation:

“Them shoes that you probably wore was designed by a white man back in the 1920s, but does that make you stop wearing them shoes because the white man designed them? I don’t care if a black man designed my shoes.”

While the man never outright identifies himself as a Klansman or an affiliate of the KKK, he defends his choice of shoes because of their “red and black and white” color scheme. Such is the design of the KKK’s official emblem, he notes.


Check out the clip below, courtesy of George Chidi:

Next Darren Wilson Opens Up to New Yorker: "I Liked the Black Community"