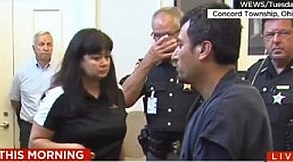 2016 GOP hopeful Donald Trump is about to get more fodder for his anti-Mexico push, because yet another illegal immigrant has been accused of committing acts of violence against American citizens — this time in Painesville, Ohio.

Juan Razo is accused of attempting to rape a 14-year-old girl, shooting and injuring another woman, and eventually shooting and killing 60-year-old Margaret Kostelnik. All of this happened on July 27, at the end of which Razo eventually surrendered to the authorities after a brief shootout.

During Razo’s hearing on Friday, Judge Mike Cicconetti ranted against Razo and his legal counsel after learning that Razo was an undocumented immigrant without a green card, a visa or any kind of legal identification. Mainly because, as it turns out, Razo had recently been detained by federal authorities, but was subsequently set free. He eventually set the suspect’s bond at $10 million after exclaiming, “I can’t set a bond high enough.”

On Saturday, CNN brought on legal analyst Joey Jackson to discuss the claims of pro-immigration organization HOLA, which claims Razo’s father filed papers on him when he was younger, and that he’d been waiting for his green card for years. The group also emphasizes Razo’s mental state more than his immigration status.

Jackson, however, returns the focus to the cumbersome federal and local immigration policies that allowed Razo to roam Ohio free of punishment.

Check out the clip below, courtesy of CNN:

Previous Darren Wilson Opens Up to New Yorker: "I Liked the Black Community"