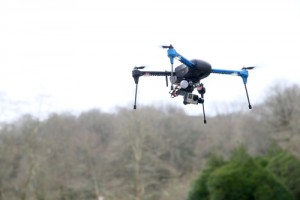 Going for a stroll in the open air of the prison yard is all fun and games until someone decides to make an illegal drop-off with a drone.

According to the Mansfield News Journal, that’s precisely what happened at the Mansfield Correctional Institution in Ohio last Wednesday. Specifically, it occurred at 2:33 p.m. in the afternoon on July 29, when prisoners on break in the north recreation yard were treated to a personal drone dropped off a package containing “144.5 grams of tobacco, 65.4 grams of marijuana, and 6.6 grams of heroin.”

The News Journal goes on, noting that:

Umanned aircraft have come into consideration for a number of commercial applications. In late 2013, Amazon announced a plan to use drones for delivery.

Last year, the Mansfield post of the Ohio Highway Patrol stepped up efforts to watch and catch criminals in the act of throwing contraband over a prison fence.

A subsequent review of security footage revealed the drop, which was intended for a particular inmate. When another prisoner launched the package over the fence into the south recreation yard, a fight involving nine inmates broke out. Guards were quickly able to subdue the fight with pepper spray.

Authorities were unable to confirm whether or not the incident was gang related. However, another report suggests that a drone was seen flying in the area before the fight broke out.

Next [AUDIO] Cop Caught Talking about Killing Black Man: "I Would F*cking Kill That Motherf*cker"