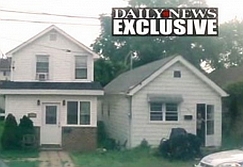 A gay man from Staten Island, N.Y., alleges that the police officers captured on video taking him down in front of his home had shouted homophobic slurs and used excessive force.

According to the New York Daily News, police came to the home of Louis Falcone after his mother called 911 while Falcone and his brother fought in the early morning. By the time officers arrived, the brother had left but Falcone remained. An across-the-street neighbor filmed as cops tackled the 31-year-old to the ground in his front yard.

Falcone was never charged with anything, and now plans to sue the New York Police Department for civil rights violations, his lawyer said. The Daily News quotes him as claiming the cops called him a “fag” while roughing him up (such slurs are not audible on the video).

“While I was on the ground, I had mud and blood in my mouth,” he told the newspaper. “One [officer] said, ‘Don’t let it get on you, he probably has AIDS, the faggot.’”

According to the police, however, “Falcone became belligerent and uncooperative” upon the arrival of the officers. “As the officers attempted to subdue him, he resisted and spit blood in the face of one of them,” a spokesman added. “The officers were able to restrain him and he was transported by EMS to a local hospital for evaluation.”

In addition to the alleged slurs, Falcone claims the officers threatened to kill his dog and used an extraordinary amount of force despite his stature (150 lbs.) and his pleading with them to not further injure his post-surgery foot.

Watch the scuffle below, via the New York Daily News:

Previous [NSFW] This is Likely The Most Offensive Tinder Profile EVER

Next [WATCH] Louisiana Cop Addresses Robber in Viral Video: "Look At Me, Son!"