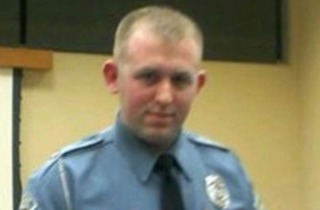 Former Ferguson police officer Darren Wilson, who ignited a national firestorm when he shot and killed African-American man Michael Brown, opened up recently in an interview with The New Yorker.

Wilson revealed that since the shooting, he has struggled to find work and has been denied employment in several police departments in the St. Louis area. After working for a shoe store for two weeks, he quit when reporters began calling. His wife, who is also a police officer, also quit her job for her own safety.

Wilson also revealed the he actually sought out the Ferguson police department because he wanted to work in a racially-mixed community, not a lily-white one. “I liked the black community,” he said. “I had fun there… There’s people who will just crack you up.”

But at the same time, he criticized the culture that he saw in the neighborhood. Wilson said children should pick the “right culture” as opposed to the “pre-gang culture, where you are just running in the streets—not worried about working in the morning, just worried about your immediate gratification. It is the same younger culture that is everywhere in the inner cities.”

Wilson’s wife Barb Wilson also spoke to The New Yorker, and recounted the first time he told her that he had killed Brown: “He just walked in and was, like, ‘I just killed somebody…’ [his] face was flushed and red—it didn’t look right.”

Wilson didn’t speak much about the actual shooting (he is still being sued by Brown’s parents), but did respond to a question about whether he still though about Michael Brown. “Do I think about who he was as a person? Not really, because it doesn’t matter at this point. Do I think he had the best upbringing? No. Not at all.”

Next [WATCH] Ohio Judge to Illegal Accused of Murder: "I Can’t Set a Bond High Enough"