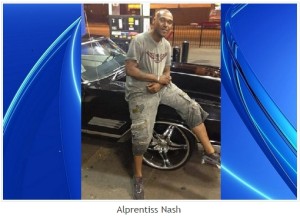 A 40-year-old resident of Chicago, Illinois, was released from prison after serving 17 years for a crime which he did not commit after DNA testing on a ski mask found at the crime scene wasn’t found to be a match to his own.

Nash was jailed when he was 19 years old and he was released at age 36. After his release, Nash went to culinary school and became a certified chef.

The state agreed to give Nash a certificate of innocence and $250,000 as compassion for taking 17 years of his life.

Now, three years after his exoneration, Alpretiss Nash was found shot dead in what police believe was a drug deal gone bad. Two weapons were recovered at the crime scene, one belonging to the suspect and the other believe to belong to Nash.

Nash, a former drug dealer, was convicted in 1995 for robbing and murdering a man and sentenced to 80 years in prison. He always maintained his innocence, claiming that he had an alibi because he was selling drugs at the time the victim was shot.

His family plans to pursue a federal civil rights case against the City of Chicago and the police department.

The lawsuit accuses the officers of coercing witnesses to identify Nash as the murderer despite the lack of any physical evidence.

“All those years that was taken from us and now we lost him again in a short period of time. He got a second chance in life and then someone took it for nothing,” Nash’s mother Yvette Martin said.

Next [WATCH] Father Drives Onto School Lawn, Tries To Run Down Kids For Fighting With His Daughter