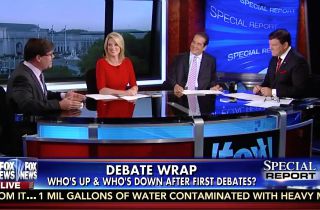 An entire Fox News panel tonight absolutely savaged Donald Trump for complaining all day about perfectly fair debate questions and further showing how thin-skinned he is.

Trump has been ranting and raving since last night about tough questions from the Fox debate moderators to the point where despite dismissing the idea that he says misogynistic things, he re-tweeted someone who called Megyn Kelly a bimbo.

Anchor Bret Baier (one of those aforementioned moderators) didn’t do much commentary himself, aside from noting how everyone got tough questions, not just Trump. But the panelists really went after him.

Charles Krauthammer asked what happened to the “tough guy” who was going to confront China, Mexico, and Vladimir Putin, because he’s suddenly whining about “not nice” questions from Fox news anchors. Kirsten Powers added, “If he can’t answer these kind of questions, he shouldn’t be running for president.”

Jonah Goldberg, meanwhile, found it “too-stupid-to-be-a-spell-checker-at-an-M&M-factory baffling” that Trump thinks a question about whether he’ll stay loyal to the party he’s running in is somehow unfair.

What really happened there, he noted, was Trump trying to “blackmail the Republican Party not to be mean to him.”

Next Trump Continues Twitter Rant Against Fox News: "You Should Be Ashamed"