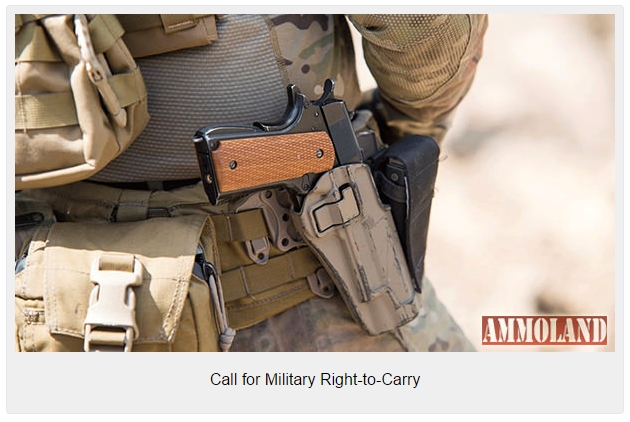 In addition, the governors of Arkansas, Florida, Indiana, Louisiana, Oklahoma and Texas have directed the adjutants general of their National Guards to authorize Guardsmen to be armed in their states.

Before the attack in Chattanooga, congressional Armed Services Committee Chairman Sen. John McCain and Rep. Mac Thornberry (R-TX) had been planning to include legislation in the upcoming National Defense Authorization Act to clarify an Army post commander’s authority to allow the carrying of personal firearms for protection. Now, numerous other senators and representatives have stated their support for legislation to allow military personnel to be armed for protection of themselves and their fellow troops here at home.

The outpouring of support for allowing military personnel to protect themselves is more than justified by the terrorist attacks of September 11, 2001, which included an attack upon the Pentagon, and events related to other military facilities thereafter. In 2009, a terrorist killed 12 military personnel and one civilian, and wounded 30 others on Fort Hood, Texas. That same year, another attack occurred upon a military recruiting office in Little Rock, Arkansas, resulting in the death of one soldier and the wounding of another. Over the next two years, law enforcement authorities foiled planned attacks upon military facilities in Baltimore and Seattle. In 2013, 12 people were killed and four were wounded in an attack upon the Washington, D.C., Navy Yard. And only eight months ago, the FBI issued a warning that ISIS was recruiting extremists to attack our military personnel here at home.

Military personnel are effectively prohibited from carrying personal firearms for protection by a Department of Defense Directive of 2011, which states “Arming DoD personnel with firearms shall be limited and controlled. Qualified personnel shall be armed when required for assigned duties and there is reasonable expectation that DoD installations, property, or personal lives or DoD assets will be jeopardized if personnel are not armed.”

That directive traces back to another Directive from the early 1990s, which contains similar language.

We encourage all NRA members to contact their U.S. senators and representatives, to voice their strong support for legislation to allow our military personnel to carry firearms for their protection.