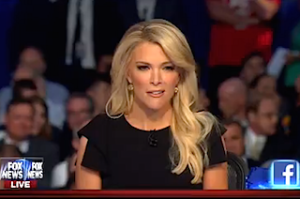 Megyn Kelly got into it with Donald Trump early in Thursday night’s first big GOP debate, calling him out for a history of demeaning comments about women. He did not take kindly to that characterization.

“Mr. Trump, one of the things people love about you is you speak your mind and you don’t use a politician’s filter,” Kelly said. “However that is not without its downsides, in particular when it comes to women. You’ve called women you don’t like fat pigs, dogs, slobs and disgusting animals.”

“Only Rosie O’Donnell,” Trump joked, but Kelly didn’t let him get away with that.

“No, it wasn’t,” she continued, asking, “Does that sound like the temperament of a man we should elect as president?” She wanted to know how Trump would combat inevitable charges from Hillary Clinton that he is part of the “war on women.”

Trump turned the question into an issue about “political correctness,” something for which he said the country “doesn’t have time.”

“Frankly, what I say — and oftentimes it’s fun, kidding, we have a good time — what I say is what I say,” Trump added. “And honestly, Megyn, if you don’t like it, I’m sorry. I’ve been very nice to you, although I could probably not be based on the way you have treated me. But I wouldn’t do that.”