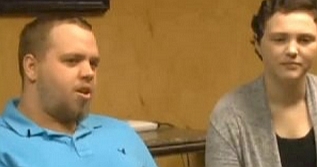 Welcome to Texas, where a criminal court judge can apparently you to marry your significant other within 30 days of sentencing as part of your probation.

At least that’s what happened to Josten Bundy and Elizabeth Jaynes in Smith County, Texas. Bundy got into a fight with Jaynes’s ex-boyfriend after the latter said “disrespectful things about Elizabeth.” Bundy later confessed wrongdoing in the matter after the ex pressed charges, but that didn’t stop Judge Randall Rogers from making his rather peculiar decision.

Judge Rogers asked Bundy if he was married to Jaynes and then said, “You know, as a part of my probation, you’re going to have to marry her…within 30 days.”

If Bundy declined to do the probation, he would be sentenced to 15 days in jail.

“He offered me fifteen days in jail and that would have been fine and I asked if I could call my job [to let them know],” said Bundy. “The judge told me ‘nope, that’s not how this works.’”

Bundy, fearing he’d lose his job while spending two weeks in jail, opted for the probation option. Jaynes did too, even though she was highly embarrassed after Rogers “made [her] stand up in court” amid “people behind [her] laughing.”

The pair was married soon thereafter, but Jaynes’s father is none too pleased:


“[I felt] anger; I was mad. [The judge] can’t do this by court ordering somebody to be married,” said Kenneth Jaynes. “I contacted a couple of lawyers but they told me someone was trying to pull my leg…that judges don’t court order somebody to get married.”

Plus, attorney Blake Bailey has concerns about Judge Rogers’s behavior in court:

“To say you’re not going to be criminally punished if you get married is way out of left field,” said Bailey. “It sounds like the old days of shotgun weddings, but not even the judge is capable of enforcing, what he thinks is best for some people in his court.”

Check out the clip below, courtesy of KLTV:

Previous BEN CARSON: If Trump Runs for Third-Party, "America Will Be Gone as We Know It"

Next 40yo Woman arrested for sexual relationship with a juvenile