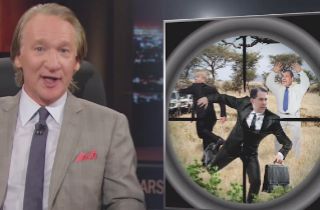 Last night Bill Maher tackled the Cecil the lion controversy and said it’s part of a larger problem of the rich in America feeling the desire to “actively take from others” with the help of their massive wealth.

Maher is well-known for having some strong views about the treatment of animals, and said, “If you’re a dentist itching to travel to another continent to do something… go to Syria, grow some balls, and take on ISIS.”

As far as he’s concerned, posing next to a dead animal proves you’re a “soulless prick” who enjoys the taking of life.

He continued to go off on the rich for buying politicians and thought up a way to cut out the middleman. “For taht kind of money,” he said, “the rich shouldn’t just get to tell politicians what to do. I think they should get to hunt them. That would be the ultimate trophy… What could be better than a trophy Republican candidate’s head on your wall?”

Imagine for a moment if a Republican was to make a comment like this. They would be vilified by the media, conservative and liberal alike, and the person would undoubtedly lose their job. As it stands, however, liberals have one set of rules for themselves and another set for everyone else.

Next If Kerry Deserved Prosecution Then, What Does He Deserve Now?