Events to mark the one year anniversary of the Michael Brown Shooting took place in Ferguson, Missouri on Sunday were supposed to be peaceful demonstrations. Well, that didn’t happen. Makes you wonder why things never seem to get straightened out in the St. Louis suburb.

CNN:A day of peaceful vigils to mark the one-year anniversary of Michael Brown’s shooting death turned ugly late Sunday when protesters threw rocks and bottles at officers, and police critically injured a man who they say fired at them.

The unidentified man in his 20s was undergoing surgery early Monday.

“We cannot continue, we cannot talk about the good things that we have been talking about, if we are prevented from moving forward with this kind of violence,” he said.

Most of the demonstrations were centered around honoring Michael Brown, but focus soon shifted as gunfire began.

Throughout the day, vigils honored the unarmed black teen. Attendants observed 4½ minutes of silence to signify the 4½ hours Brown’s body lay on the street after he was shot last year. 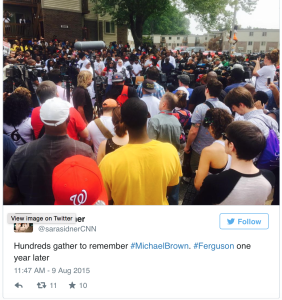 But the suspect’s gunfire shifted the focus Sunday night.

When officers first saw him, he was running away after allegedly exchanging gunfire with an unknown person.

Some gunfire rang out as reporters were talking to Ferguson’s acting police chief, Andre Anderson. A startled Anderson continued speaking, with a steady burst of gunfire heard in the background. Crowds scattered.

Detectives in an unmarked SUV turned on its emergency lights and pursued the suspect, only to be shot at, according to Belmar. The bullets hit the vehicle’s hood and windshield several times, Belmar said.

As the detectives got out of the car, the suspect allegedly turned around and fired again.

Then he ran toward a fenced area, where he continued firing — until officers struck him multiple times, Belmar said.

The four plainclothes officers involved in the shooting have between six to 12 years of experience, he said. They have been placed on administrative leave.

Things got worse as the evening progressed. Journalists, police and businesses were attacked. 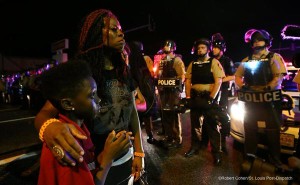 Several objects were thrown at police and some businesses damaged, the St. Louis County Police Department said. A journalist was attacked and robbed in a parking lot. Three St. Louis County police officers were injured: One was struck in the face by a brick, while two others were pepper-sprayed.

Police, with helmets and shields, pushed crowds back and called in tactical units.

Perhaps some of the violence was incited by the presence of a roasted pig, being carried through the demonstration site. The pig donned a police cap and the head of the pig was delivered to the Ferguson police station. So much for peaceful protests. The pig protests received little media attention from local outlets. 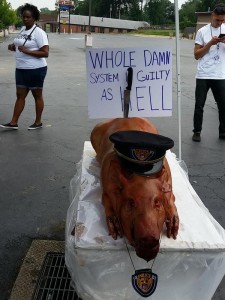 Read more about the pig, and the “peaceful” protests at RT.com.

What do you think? Will Ferguson ever get its act together? Will Darren Wilson ever regain the respect of his position as a law enforcement officer and exoneration in this incident? Leave your comments below.

Get the latest headlines here! Read what you have missed!

WHO WOULD BURY A DOG ALIVE AND LEAVE IT FOR DEAD?

There is just no explaining some human behavior. Why would someone bury a dog alive and walk away. This dog was found buried with his …

WOULD YOU LIKE A SIDE OF METH WITH THOSE NACHOS?

If you’re looking for Mexican food with a kick, Cedar Rapids, Iowa might have been the place to go. Police just shut down a meth operation …

Wild horses, while not indigenous to North America, are a wonderment to the natural environment, especially in the west. Over 400 years their numbers have …

BE PREPARED FOR THE DEBATE: IT’S THE DONALD TRUMP GOP DEBATE DRINKING GAME!


Previous [WATCH] Megyn Kelly Dismisses Debate Criticisms: "If You Can’t Get Past Me…"

Next The Truth On Jeb And Common Core, Not The @#%*! He Spewed At The GOP Debate