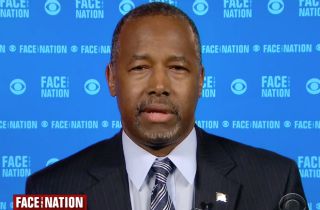 Before Donald Trump, Ben Carson was probably the Republican who most spoke of how political correctness is hurting the country. Now it’s Trump dropping that excuse left and right, most notably when Megyn Kelly confronted Trump about his past sexist comments.

Trump simply said he’s not politically correct, and that was it.

But Carson thinks there’s a line you can cross when you’re being politically incorrect, and talked to CBS’ John Dickerson about it on Face the Nation this morning.

“I think there may be a difference,” Carson said, “between political correctness and, you know, courteous speech.”

He made it clear that political correctness makes it difficult for people to honestly speak to one another, but “in no way to I advocate saying mean things about people.”

When asked specifically about Trump, Carson said his comments “certainly would not be the kind of things I would engage in.”

Watch the video below, via CBS:

Previous [WATCH] Fisherman sinks hook into $12m worth of Cocaine

Next [WATCH] Rand Paul on Trump: Since When Does "Vulgarity Equate to Insight"?