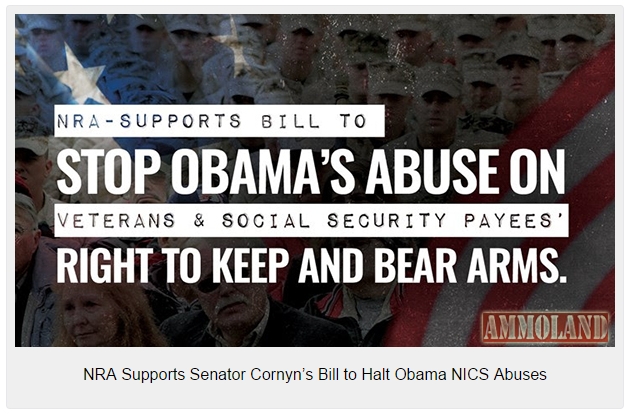 As we reported on July 18th, Obama’s latest gun grabbing ploy was to forward all individuals receiving Social Security Administration (SSA) benefits through a representative payee to the National Instant Criminal Background Check System (NICS) as “prohibited persons” under federal firearms law. This is estimated to impact over 4 million Americans.

But this approach is nothing new to Obama bureaucrats. In fact, stripping Second Amendment rights by administrative fiat has become Obama’s favored tactic in the face of Congress’ refusal to pass gun control. As we’ve previously reported, the Veterans Administration (VA) was the first to develop an administrative mechanism to forward records to NICS without due process protections in place. The VA is doing so for those veterans who have a fiduciary assigned to their account. This is being done without any adjudication or finding that such veterans pose a danger to the community, but simply because they need help managing their financial affairs.

While Obama may relish the ease by which his pencil-pushers can deprive American citizens of constitutional protections, the NRA has pressed Congress for legislation to end this abuse. Senator Cornyn answered our call by introducing S. 2002, a bill that provides critical protections needed in the face of Obama’s bureaucratic onslaught.


The bill clarifies that an “adjudication” under the Gun Control Act’s (GCA) mental health provisions will require due process protections, including a full hearing in which an individual has notice, the opportunity to participate, and the right to counsel.  Moreover, the findings of such a process are clearly specified and focus on adjudications that involve individuals that are a danger to themselves or others.

Importantly, the bill removes the category “lacks the ability to contract or manage affairs” as relevant to the determination of a prohibited person under the GCA. This provision was the hook used by the VA and SSA, and presumably being considered by other federal agencies under Obama’s directive, to sweep broad swaths of the American public into NICS.

For veterans, the bill even provides additional protections. It requires notification to veterans who have been submitted to NICS under the “fiduciary” program and an opportunity to have their individual case reviewed by a board established for this purpose. The standard is exactly where it should be, requiring the new board to find the veteran is actually a danger to themselves or others to justify retaining their record in NICS. In all cases, the board’s decision will be subject to court review.

The bill would also significantly expand avenues of relief from firearm prohibitions for others, including those who have their record expunged, those who are no longer subject to an order for treatment, and those who have been granted relief by a state program.  The bill further requires the Attorney General to remove from NICS the record of any person who would not be considered prohibited under the new requirements of the bill.

The states will be encouraged to submit records with a “carrot and stick” approach where the states can maximize grant allocations by forwarding 90% or more of disqualifying mental health records within 18 months of the bill’s passage. Importantly, the bill’s safeguards provide the standards by which records can be transmitted. Only those mental health adjudications which comply with the new due process protections are to be forwarded.

In summary, this bill would protect millions of law-abiding citizens from bureaucratic abuse by the Obama Administration, while ensuring only relevant records that comply with the new due process safeguards are entered into NICS.


Previous Taking Down The Donald

Next [SHOCKING] Parents covered windows of HOT car to hide Children inside....