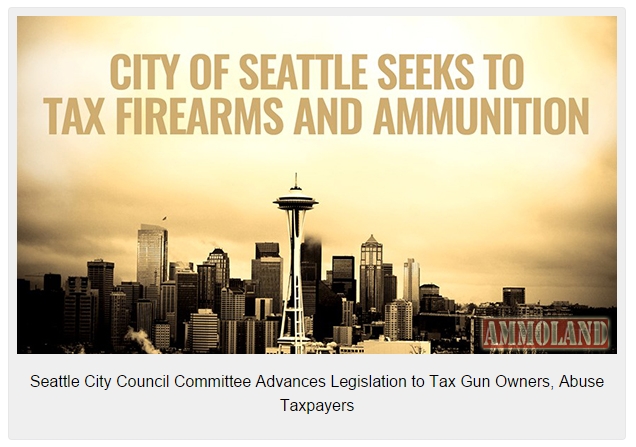 This week the Education and Governance Committee of the Seattle City Council unanimously advanced legislation to implement a $25 tax on firearms and a $0.05 per round tax on ammunition sold at retail, and to force gun owners to report a lost or stolen firearm within 24 hours.

The city council has moved forward with the proposal despite Washington’s strong firearms preemption statute that was intended to stop just these sorts of local restrictions. A final vote on the legislation will take place Monday, August 10th.

The burden of regressive taxes like the Seattle proposal falls squarely on those that are least able to afford them. Persons of means will simply drive outside the city to purchase firearms and ammunition, while those without such options will be forced to go forego their rights or pay the tax. This is especially egregious considering how those at the lower end of the economic scale also tend to reside in areas where violent crime is the highest. One wonders whether this type of social engineering on the downtrodden is an intended feature of the legislation rather than an unfortunate consequence.

At the August 5th committee meeting, Seattle gun store owner Sergey Solyanik shared with city council members the realities the tax would impose on his business and the 22 other firearm dealers in the city.

Solyanik reiterated points he made in mid-July to a reporter for the Seattle Times, when he explained, “I would have almost no margins, so I would pass the tax on to my customers and most people would simply not buy from me… They would go to any of the stores around Seattle — there are a large number — and I would have to close.”

Solyanik also took issue with how the city came up with the estimate that the tax will raise $300,000 to $500,000 annually. A description in the Times article of how the city estimated the revenue suggests they failed to take into account the decrease in sales or outright loss of businesses the new tax would cause.

As another Seattle dealer told the Times, “The public won’t buy ammunition in Seattle anymore… When a $10 or $15 box of ammunition costs an extra five bucks, it won’t be worth it.” Solyanik concluded his comments by stating, “I believe the citizens of Seattle deserve a decision making process based on data and logical analysis not ideals.”

Bizarrely, according to the Seattle Post-Intelligencer, Seattle City Council member Sally Bagshaw has argued in favor of the tax on the grounds that it will be used to fund gun control research. Bagshaw complained of the restriction preventing the Centers for Disease Control from funding anti-gun research, stating, “If we want research money, this is the only way to get it.” This is a grossly untrue statement. Plenty of anti-gun research, like that being conducted by the Johns Hopkins Bloomberg School of Public Health’s Center for Gun Violence Policy and Research, is being funded by well-heeled private individuals and foundations. The CDC restriction merely protects taxpayers from being forced to pay for what amounts to anti-gun political activism.

While exposing the lack of an intelligent process for developing the proposed tax, whether the revenue estimate is accurate or not is likely of little concern. Rather than producing the claimed windfall of tax revenue, the legislation will likely force the city and its taxpayers to pick up an expensive legal bill.

The state of Washington hereby fully occupies and preempts the entire field of firearms regulation within the boundaries of the state, including the registration, licensing, possession, purchase, sale, acquisition, transfer, discharge, and transportation of firearms, or any other element relating to firearms or parts thereof, including ammunition and reloading components.

A 2008 opinion from the Washington State Attorney General stated that these sorts of local firearm laws are prohibited by the preemption statute. Further, the Court of Appeals of Washington has already educated Seattle on this matter, striking down a local restriction on the Right-to-Carry in city parks back in 2011.

The city council still has an opportunity to spare Seattle’s gun owners and taxpayers from this misguided legislation. This selfish and unwise proposal simply raises the political profile of its backers on the city council using funds from the city’s coffers.