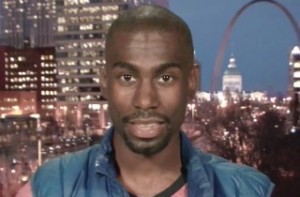 In an interview with The Daily Beast’s Justin Glawe, prominent #BlackLivesMatter activist Deray McKesson refused to say whether police shootings are justified when the suspect pulls a gun and fires at law enforcement officials.

Glawe was present at Monday night’s Ferguson protests, and spoke with McKesson and fellow activist Hermz about their views on police shootings. “Neither McKesson nor Hermz wanted to discuss the hypothetical that underpins the clearest legal justification for use of force by police: If someone points a gun at an officer (and even fires it), is the officer justified in using lethal force?” he writes.

Instead, McKesson responded with a question of his own: “If someone killed your child, what would it take for you to say it was justified?”

McKesson also refused to say that the 2014 shooting of black man VonDeritt Myers Jr. by St. Louis police after he pulled a gun and fired was justified. “He actually didn’t shoot at the police. That’s a lie,” he said, even though a a 272-page report released by the St. Louis Police Department indicated the opposite.

He also continued to maintain the guilt of Darren Wilson in the shooting death of Michael Brown, and said he “still [has] more questions than answers” about the Sunday night shooting of Ferguson native Tyrone Harris Jr. after he fired upon police.