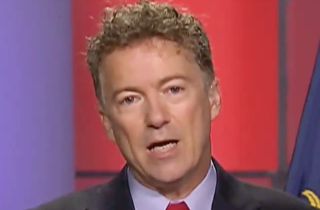 Rand Paul was the first of Donald Trump‘s rivals to go on the attack against him at last week’s Republican debate, right after Trump got booed for refusing to commit to the GOP. Paul said, “This is what’s wrong. He buys and sells politicians of all stripes.”

On Fox News Sunday today, Paul elaborated to Chris Wallace, saying, “I don’t think we should reward vulgarity. And I don’t think vulgarity equates with insight.”

He found it a little ridiculous that the criteria some people are choosing their president by is the one who can insult the most people.

Paul again called Trump a likely “fake conservative” who’s masquerading as a “truth-teller” and “could be a liberal for all I’m concerned.”

Watch the video below, via Fox:

Previous [WATCH] Carson Swipes at Trump: Difference Between Being Politically Incorrect And Being "Mean"