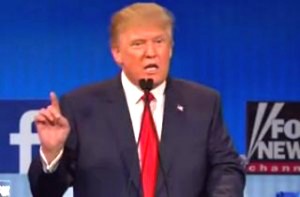 Donald Trump finally laid out his plan for dealing with Iran (or ISIS?) on Fox & Friends Tuesday, recommending that the United States “knock the hell out of them” and then “take the oil.”

Host Steve Doocy asked Trump about his plans to deal with ISIS. But whether he was confused or misspoke, Trump started talking about Iran. “Iran is taking over Iraq 100%, just like I predicted years ago,” he said. “I say this, I didn’t want to go there in the first place. Now we take the oil.”

“We should have kept the oil,” Trump continued. “Now we go in, we knock the hell out of them, take the oil, we thereby take their wealth. They have so much money.”

“They have better internet connections than we do in the United States,” he complained. “They’re training our kids through the internet. We have to knock out their wealth.”