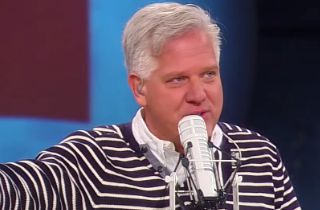 Glenn Beck was both shocked and amused by the Black Lives Matter protesters who hijacked a Bernie Sanders rally to demand their voices be heard.

Beck was first amazed by the lack of security around a sitting senator and presidential candidate that allowed two random people to just get up on stage right next to him.

They kept shouting to Sanders that they would shut down the event if they didn’t get a chance to speak, which Beck deemed a “terroristic threat.”

He and his co-hosts laughed after hearing one of the protesters shout “We are reasonable!” leading to co-host Pat Gray mock-shrieking, “I’m gonna show you how reasonable I am by stabbing you in the face!”

They continued to listen and Beck said the shouting couldn’t have possibly been real, it still had to be “a cartoon Pat scream.”

Watch the video below, via BlazeTV:

Previous [WATCH] Megyn Kelly on Trump Attacks: I "Will Not Apologize for Doing Good Journalism"