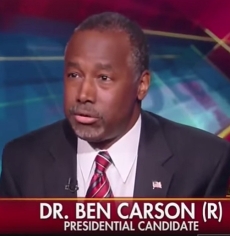 Appearing on Fox’s Your World on Wednesday afternoon, Republican presidential candidate Ben Carson suggested Planned Parenthood places its clinics in black neighborhoods as a method of controlling that population.

While discussing the Republican Party’s push to defund the non-profit women’s health organization — over claims it uses taxpayer dollars for abortion procedures — Carson told Cavuto: “I know who [Planned Parenthood founder] Margaret Sanger is. I know that she believed in eugenics and that she was not particularly enamored with black people.”

“One of the reason that you find most of their clinics in black neighborhoods is so that you can find a way to control that population,” he continued.

Indeed, Sanger’s views on “birth control” found overlap with the eugenics movement of her time (Sanger passed away in 1966), though the many differences have been repeatedly pointed out by Planned Parenthood itself.

Nevertheless, Carson added, “Look and see what many people in Nazi Germany thought of her.” (Interestingly, Sanger’s books were among the first to be burned under the Nazi regime.) The retired neurosurgeon also added that Hillary Clinton has praised Sanger in the past.

Watch below, via Fox: