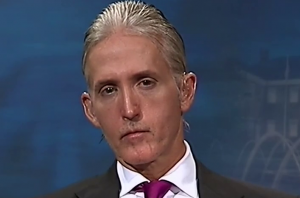 Republican Congressman Trey Gowdy said Tuesday on CNN’s Wolf that it was “about damn time” after Democratic presidential candidate Hillary Clinton decided to hand over her private email server to the FBI.

“’About damn time’ was my initial reaction,” the chairman of the House Select Committee on Benghazi said. “We asked her in March to turn that server over to a neutral detached independent arbiter like the inspector general.”

He added that he didn’t believe for a second that Clinton “voluntarily” handed the server to the FBI. “They generally don’t ask. They generally tell you to do so, and I doubt very seriously that they ‘asked’ her to turn her server over. If they have jurisdiction, they don’t need to ask; they just go get it.”

Guest host Brianna Keilar asked Gowdy about Clinton’s signed statement released this week, certifying under the penalty of perjury that she has turned over all of her e-mails. “Do you take her at her word?”


“Well, I read that statement, and it’s easier to read Egyptian hieroglyphics than it is to parse the words that her lawyer wrote in that statement,” he responded. “Wherever you see the phrase ‘on information and belief,’ that should be a blinking red light for you to be suspicious of it.”