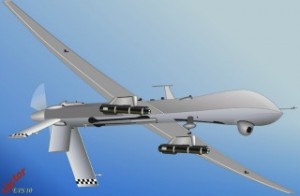 In the wake of the FBI’s seizure of “top secret” emails from Hillary Clinton‘s private server, interest has been split between Clinton’s improper handling of the information, as well as what sort of secrets there might’ve been.

A new report from the Associated Press alleges that U.S. officials have disclosed that one of the subjects on the emails was an operation that involved drones.

The official wished to remain anonymous, and while he or she wouldn’t go into detail due to remaining questions about the classification level, the official said Clinton did not transmit the sensitive information herself. The official also said that the emails did not make any definite references to any communications intercepts, confidential intelligence methods or other forms of sensitive sourcing.

The official reportedly disclosed that the conversation began with reference to a news article dealing with CIA anti-terrorist operations in the Middle East. The rest of the report continues on about information that has been deemed classified, but officials claimed that the language that Clinton and her correspondents were discussing the issue in a way that implies some kind of confirmation.

Clinton’s campaign continues to receive backlash from the aftermath, with many politicians and media figures blasting her for negligence and reckless behavior. Clinton herself has largely avoided discussing the scandal’s developments herself, but recently released a statement urging supporters to pay the scandal no mind.

Previous [Video] Mother takes Child to the store and instructs her to steal, what she steals is the worst part

Next [VIDEO] Do Blacks Want A Race War?